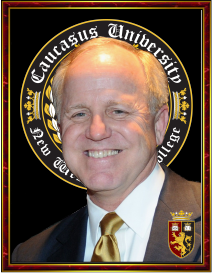 Professor Shimp has earned the Doctor of Philosophy Degree from Sophia University St. Kliment Ohridski conferred by the Ministry of Education of the  Republic of Bulgaria. He has earned the Master of Science Degree in Information Systems Management from the United States Naval Postgraduate School and the Bachelor of Science Degree from the United States Naval Academy at Annapolis, Maryland.

For thirteen years, Professor Shimp was Vice President for Program Development at Maybank Industries LLC in Charleston, South Carolina, which specialized in maritime security, intermodal logistics, vessel design and construction, and international project management. He is now the principal of his own consulting company, focusing on small business development and international export opportunities.

Professor Shimp was certified by the United States Department of Defense as a Foreign Area Officer and has also served as Honorary Consul of the Republic of Georgia since 2010. He has previously served as an Advisor to the Lieutenant Governor of South Carolina, Chairman of the Maritime Security Commission, and is President Emeritus of the Black Sea Council of the Navy League of the United States.

Professor Shimp has a distinguished record of volunteerism and naval service. He started his naval career in 1976 in the United States Navy and retired as a Captain in 2001. Thereafter, he was appointed as Commander of the federallyrecognized South Carolina Naval Militia in 2005 and retired in 2009 with the state-commissioned rank of Rear Admiral (Title 10, USC). Professor Shimp’s leadership experience with the United States Navy includes serving as Director of U.S. Naval Security Group (Atlantic), Director for Cryptology and Director of Information Operations of the U.S. Atlantic Fleet, and Commanding Officer of the combined US-Korean military and civilian unit supporting volatile operations on the Korean Peninsula.