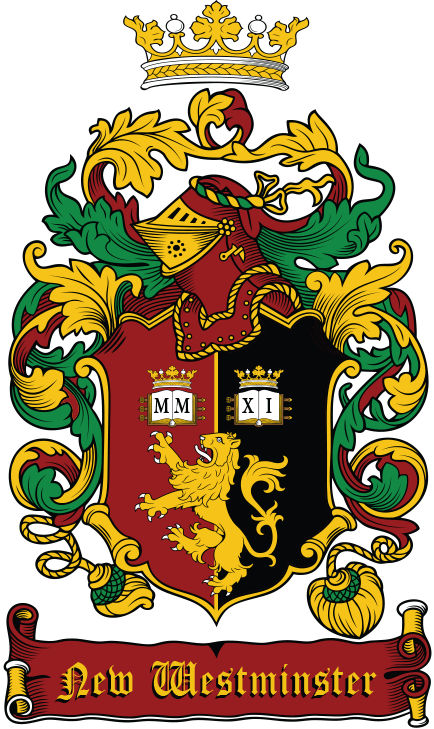 The meaningful symbolism of the Insignia and graphic images of New Westminster College reflects our ardent commitment to academic excellence in an environment that strengthens character, while providing top caliber education in a variety of curricula. The motto Veritas et Libertas (Truth and Liberty) suggests the important balance and mutually supporting nature of honest discourse with freedom of thought that challenges each and every student at New Westminster College in the pursuit of knowledge.

The shield is paled into two fields of sanguine and sable (maroon and black), which represent the qualities of patience and faithfulness coming together to achieve success. It is surrounded of sanguine, or, and vert (maroon, gold, and green), symbolizing security that is drawn from a foundation of persistence, compassion, and hope. The shield is emblazoned with an Olde English lion rampant that portends strength and ferocity but its claws and tongue of argent (silver) remind us that the tools and words of the brave are often colored by peace and cooperation. The Crown surmounted atop the crest honours the history of New Westminster as being the first capitol and Royal City of British Columbia, Canada.

The New Westminster College of Caucasus University shall maintain itself as a preeminent global institution of higher learning by inculcating and inspiring academic excellence, professional development and ethical leadership.

The New Westminster College of Caucasus University shall advance the frontiers of human knowledge to address the complex challenges of the 21st century through the preparation of capable and ethical leaders; discovery of new knowledge and intellectual scholarship; and full participation and development of individuals to explore their interests, potential and capabilities.